If you’ve used Revit, you pretty much know that you should avoid opening up a backup file unless it’s absolutely necessary to do so.  What I mean by that is you typically aren’t going to open up a file that has “filename.0000.rvt” (for example) as a name…the .”four digits”.rvt (or .rfa) in the file name means it’s a backup.

Well, the other day I was explaining to a group of new Revit users how saving and Revit’s backup files work and I opened up a backup file to show that it is a full size, fully functional backup file.  I went to hit save to show that when you save the file, it would still allow you to save the file.  To my surprise though, a little notice popped up asking if I actually wanted to save to the ORIGINAL file, not the backup!  This was a surprise to me since every time I’ve opened a backup file, I’ve always performed a “Save-as” to give the file a new name or overwrite the original file. 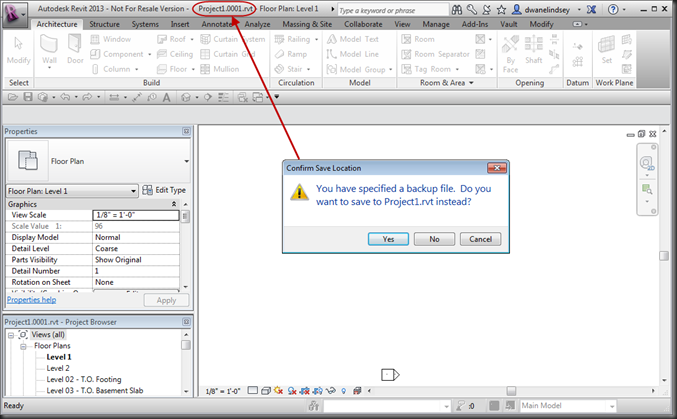 If you click “Yes” on this message, it will actually save the file over the original file, just as if you would have opened up that file instead of the backup.  If you click “No”, then you’ll be saving the changes to the backup file, thus creating a “new” file and the subsequent backups will now be “filename.0001.0001.rvt”!

I’ve been working with Revit since it was Revit Building 7 (I believe, whatever it was called in 2005) and I’ve never seen this.  So, I went back to Revit Architecture 2011 (which is as far back as I have installed) and this message does appear.  I’m not really sure if this has always been there or when it was introduced?  Regardless, I like the message and hopefully it will help those that accidently open a backup file save the changes to the appropriate file.

Posted by Dwane Lindsey at 3:23 PM No comments: Links to this post

The views and expressions on this blog are solely my own and do not reflect those of Pepper Construction, Autodesk or any other company's product I discuss.